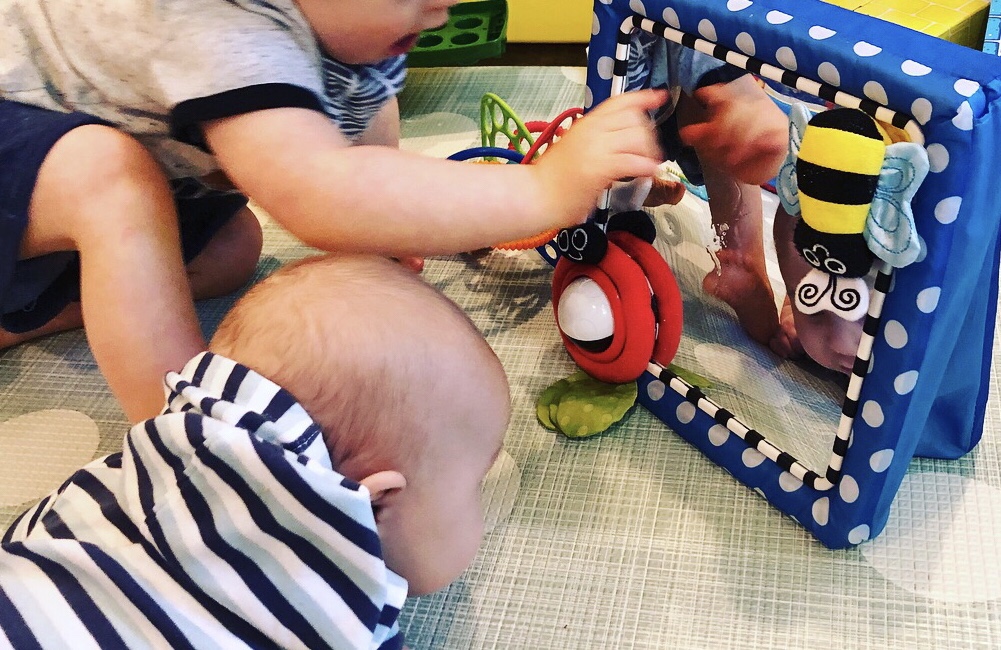 I’m never quite sure how to respond to questions about Henry being our first child AND sporting an extra chromosome. Is the question geared towards the extra time and effort for appointments, therapies, and forward progress? Or is it on the experience as a whole? How did we do as new parents with extra in our firstborn? Well, it is hard and easy.

The appointments and watchful waiting for medical complications was difficult and stressful in the beginning and I was anxious and fearful. Henry as a baby: easy. Super easy. The blessed child slept through the night as soon as I started letting him. We did wake Henry to feed and change him every 2.5-3 hours until he was a month old. Henry never really cried. He’d do this funny little “HEY!” yell when he was hungry or needed a change. He was pretty chill. He would stare quietly with wide eyes and watch people move about the room. I cuddled him obsessively and held him a LOT; he was such a little chunk of love. I even wore him in a boba wrap rather than sit him down for a second. I held extreme guilt and sense of loss for not being able to hold him at birth.

He had preferences extremely early for certain people. Loud noises and voices startled him into pitiful, almost painful cries: sneezes, coughs, breathy laughter even. He will still cry at how some people laugh. We began appointments and interventions immediately. We were going to appointments weekly; sometimes 4-5 times a week. James and I both went to every appointment with Henry: United as a team. We had no knowledge of anything different so our expectations were easily melded and adjusted by Henry. I suppose it’s like when parents have twins in their first pregnancy as opposed to second. You don’t know any different so you don’t miss the extra time as much.

Henry as a toddler: he is exactly how I expect other toddlers to be. He is extremely expressive so even though he is not talking yet, his face paired with signing tells us everything we need to know. He is all over the place constantly even though he is not walking independently; he crawls, pulls up, climbs up, and cruises at lightning speed. He’s getting the hang of using his walker and loves walking outside.

Now that we have Ezra, I sometimes get sad Henry didn’t have the same experiences. The initial bonding at birth. The welcoming of new life by opening up our home to visitors and taking adventures outside. I can see a blurry outline of the future… of me not being so scared for Ezra as I was for Henry. Ezra is a warrior. I can see myself not crying as I drop Ezra off for his first day of preschool. And that makes me feel a loss somehow for Henry. I wish that I had felt more joy and not as much fear for him.

Thinking of watching my second son surpass my first in growth and development is hard. It’s a heavy feeling. I dread the possibility that we will be watching Ezra receive opportunities Henry won’t: in scholastics, athletics, and social events. I know Ezra will catch up to Henry with his development quickly. Those thoughts cause my emotions to be in conflict… I’m happy Henry and Ezra have each other. I feel at ease knowing they will be so close. They will be able to look out for each other. Ezra will be able to be Henry’s voice if need be and vice versa. Watching their relationship grow as they begin to bond sparks joy and warmth in my heart that I’ve never known. Just the other day while we were out a few ladies in scrubs stopped to ohh and awe over my boys and as they touched sweet sleeping Ezra’s feet Henry’s face changed from fear to anger. He spun around in my arms to face them. He began yelling, crying, and signing all done. He took a position of protection for his brother and that got me right in the feels. Henry tenses and gets ready to flee to our arms when he sees scrubs or a white jacket. When I worked I’d have to take my scrubs off before Henry would even acknowledge me. So I was surprised that he faced these women.

I don’t really know what to do in some aspects with Ezra. I’m learning how to be his mom- the experience is so different. He shocks me at his strength all the time. Things I did for Henry don’t always work for Ezra. I could pretty much sit Henry almost anywhere and he’d be pretty ok. Ezra wants to be sitting up and wants to move positions a lot. Henry was pretty quiet. Ezra is super loud. We still purposely do not look at ages for typical milestones. We don’t want to compare the boys. They will each have their own areas where they excel.

So the answer to what it’s like having a DS diagnosis with our first child: We are busy. We are happy. We have good days and bad days. We try to appreciate and take joy in every little thing. There are parts of our lives that feel easier having Henry first as opposed to second. Some parts feel harder having a neuro typical child second. Our family’s experience is multidimensional and I can’t find the words to make the answer simple. I’m learning how to be the mom Henry needs and I’m learning how to be the mom Ezra needs.

Start a Blog at WordPress.com.